Serratus posterior superior is a thin, flat muscle in the upper back. It anchors on the spine and assists in the breathing process by lifting the ribs. It is deep to the extrinsic back muscles but straps over the erectors and other intrinsic back muscles.

This muscle is the most superficial of the intrinsic back muscles and straps across the erectors, levator costae, and intrinsic spine muscles.

This muscle acts as a 5th scalene. It has similar attachments. Likewise, it elevates the ribs for inhalation. It is especially active when the person is bent forward, as when working on a laptop while reclining on a couch.

Serratus posterior superior attaches to C6-T3 and inserts on ribs 2-5, trapping the 2nd and 3rd thoracic vertebrae. A thin sheet of connective tissue attaches along the mid-line of the spine. The width of this aponeurosis varies significantly among dissections but tends to be a much larger part of the structure than is usually illustrated.

Its strongest insertion is along the superior aspects of the 2nd through 5th ribs near the lateral angle. In dissections, it clearly feathers into the fascia between the ribs so that it has the shape of a rhomboid rather than the finger-like bellies that are commonly illustrated.

Basics of Attachment and Function

Origin – nuchal ligament from about C6 and along the supraspinous ligament and spinous processes from C7 to T2 or T3.

Insertion – superior aspect of ribs 2-5, just lateral to the angle of the rib

Function – elevation of the ribs, assists in inhalation

Breathing muscles can be divided into three groups:

This is one of the muscles that assist in the breathing process. Basically, these muscles act to expand lung capacity by pulling ribs. In most cases, they should be most active when the diaphragm is unable to engage. This might occur when we are bent forward while working at a desk, curled forward on a couch, or putting on our shoes.

Because of our sedentary lifestyle, these muscles tend to be over-used when we are breathing quietly. We become trained to use them, even when the diaphragm can do the job. Tony Preston June 17, 2016 No Comments
People complain of pain under the shoulder blade that they can’t reach. It aches fairly constantly. It is a bothersome ache that they can’t shake. They…
Read More 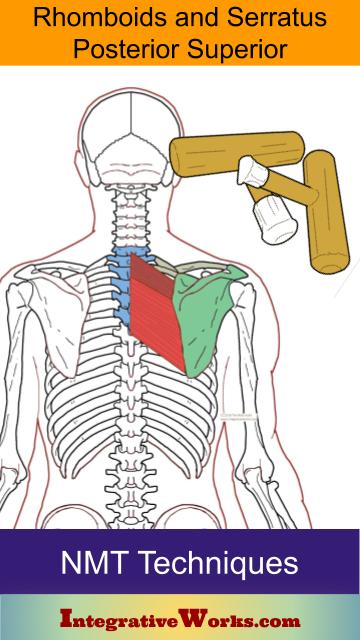 Tony Preston February 19, 2020 No Comments
This routine is most commonly used as a part of a more complete approach to Forward-Head Posture. It works well when it follows the treatment…
Read More Self Care – Breathing exercise for upper back pain

Tony Preston June 18, 2016 No Comments
These exercises for relief from upper back pain can be very effective when done properly and regularly. Many clients balk at making the magazine rolls.…
Read More Self Care – Can’t Reach Pain Under the Shoulder Blade

Tony Preston February 19, 2020 No Comments
Typically, people ignore this pain that can’t be reached under the shoulder blade until it becomes chronic. At that point, these trigger points are stubborn…
Read More Tony Preston April 7, 2018 No Comments
Serratus posterior superior is a thin, flat muscle in the upper back. It anchors on the spine and assists in the breathing process by lifting…
Read More Tony Preston February 19, 2020 No Comments
Serratus posterior superior produces an ache under the shoulder blade that is easily confused with the referral patterns of other muscles. It is involved in…
Read More

This site is undergoing changes. Starting in early 2020, we began changing the format of the posts to include more extensive self-care, illustrations, therapist notes, anatomy, and protocols. We’d love your feedback. We are adding posts and converting the old posts as quickly as time permits.

Is the pain from
degenerative discs or
trigger points in the muscle?

This post discusses the differences in pain from disc problems and pain from trigger points. Who should you see to help with your pain?

*This site is undergoing major changes. We are reformatting and expanding the posts to make it easier to read, more accessible, and
to include more patterns with better self-care. In the meanwhile, there will be inconsistency in formatting, content, and readability until we get the old posts updated. Please excuse our mess.